“Don’t be cruel,” croons the man in the white jumpsuit, swiveling his hips and flashing the sequins, “to a heart that’s true.” The crowd of salarymen and young women roars because Elvis isn’t dead. He’s on stage in the back streets of Roppongi and coming at them through i-mode on their cellphones.

Yasumasa Mori works full-time as Elvis. The impersonator calls himself ‘J’Elvis,’ short for ‘Japanese Elvis,’ and is likely the country’s best-known Elvis Tribute Artist. He’s been at it for over 20 years, playing throughout Japan and in the US, and has been interviewed on major TV networks in both nations. 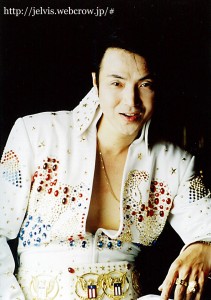 In 1992, Mori won the International Elvis Impersonator Contest in Memphis, Tennessee, becoming the first non-American to do so and beating out 200 contenders who would be King. While he has the hair, the suits, the glasses and even the karate moves, Mori regards them merely as necessary trappings for Japanese audiences and prefers to call himself an Elvis ‘interpreter,’ rather than a mimic. 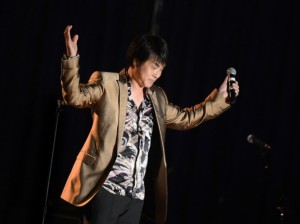 “If I sing Elvis without the costume, without the sound, they don’t feel the atmosphere of the South — I mean America — and his life,” says the 40-year-old Tokyo native. “So I just want to give Japanese people the costume, the sound — that’s the most integral part, the action, everything.”