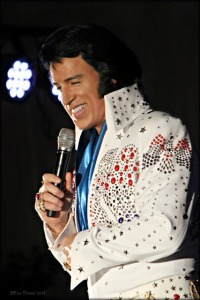 Doug Church began his Elvis career in the U.S. Air Force in 1983 while competing against hundreds of other contestants and winning annual talent contests. Starting at the base level and proceeding through to the regional levels, he defeated the best entertainers from many bases in the European and U.S. Air Force commands. In four years, he collected 11 first place trophies for his well-developed likeness to Elvis, as well as other categories ranging from best male vocalist to best comedic performance. 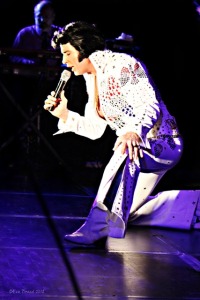 After leaving the Air Force in 1987, Doug continued his act around the Midwest. In 1990, he competed in the fourth annual Images of the King Contest in Memphis, Tennessee against Elvis entertainers from all over the world. He took home the second place prize for only his first time in this competition. The following year, Doug returned to Memphis to capture the first place crown as “The World’s Best Elvis Impersonator.” In 1993, after a successful audition with Legends In Concert (a musical entertainer venue based in Las Vegas, Nevada) he started touring the country and the world. Doug has performed in such exotic locations as: Bangkok, Hong Kong, Aruba, The Bahamas, Moscow, France, The United Kingdom, and Denmark. 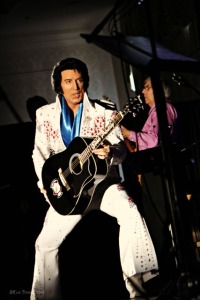 In 1999, Doug starred in and performed soundtrack vocals for the award winning documentary film “Almost Elvis.” Doug still works with Legends in Concert from time to time, but prefers to freelance and do the shows that won him acclaim throughout the Midwest. It may be hard to imagine how anyone could possibly duplicate 70 different voice personalities with perfection, but Doug Church can! He has awed his audiences for 19 years, leaving them totally mesmerized and shaken- by one of those voices in particular- that of Elvis Presley! Doug’s voice has been acknowledged by his peers as being the closest to “The King’s.

His career is going stronger than ever, with his fans keeping him pretty busy entertaining from Vegas through the Midwest, and now to the East Coast. His recording career is sky rocketing with the release of new albums.

1991 Images of the King Champion