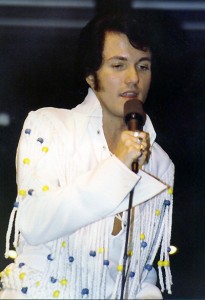 Glenn Bowles is an international award winning tribute artist. Since 1978, Glenn has been wowing audiences throughout the United States, Canada and abroad with his uncanny recreation of Elvis’ 1970’s live stage performances.

Glenn carries the distinction of being the first person to ever hold the title of “World Champion Elvis Tribute Artist” when, on the 10th anniversary of Elvis’ passing; he won the very first Images of the King World Championship in Memphis, TN. 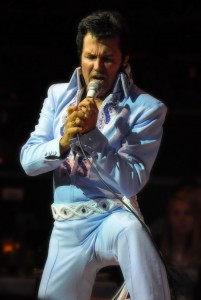 Not to limit his talents to portraying Elvis exclusively, Glenn joined The Van-Dells “The Nation’s #1 Rock & Roll Review”. Since 1990, he has toured with this well established group performing many of the greatest hits of the Rock & Roll era, as well as featuring his Elvis tribute as part of the Van-Dells’ show.

Over the years, Glenn has performed before tens-of-thousands at numerous venues such as Casinos, Dinner Theaters, Nite Clubs, Fairs, Festivals, Amusement Parks as well as Cruise Ships and Sports Arenas.

Glenn has shared billing with such musical legends as Chuck Berry, Roy Orbison, Conway Twitty, and Alan Jackson just to name a few.